SHINE 12th Edition Release: The Fruit of the Spirit Edition

I have been absent for some time now and I miss you all very much. I want to share with you the latest edition of SHINE Magazine! The release date and party was back on September 29th. I went in for surgery just a few days after and have been in recovery and I did not get this posted. You can visit the SHINE blog which has great articles posted weekly to encourage you. You can find the link to the release recap here and a short, fun video recap here. 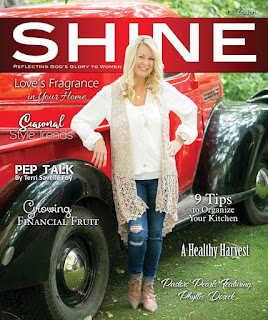 SHINE Magazine is full of gifted and talented writers who penned amazing articles to encourage you in your journey and walk with the Lord, and how to develop the fruit of the Spirit in your life. These make great Christmas gifts! Order yours today! You can order one here!

I had the privilege of being the Copy Editor again for this edition, along with a contributing article! It was such a joy to work on this edition—it is a labor of love! Below is the article that I wrote for this edition, I pray that you read about Hannah More and feel inspired to transform your world around you.

Hannah More: Changing the World with a Pen

“Amazing Grace how sweet the sound that saved a wretch like me,” is a familiar line from the beloved hymn penned by John Newton. However, less familiar among Newton’s writings is a collection of published letters titled Cardiphonia, which is translated The Utterance of the Heart or The Voice of the Heart. Many have been touched by Newton’s compelling story as the captain of a slave ship that birthed the great hymn. But one woman, moved by Newton’s collection of writings, was also moved to change the world.

Hannah More was an English playwright and poet, and later a religious philanthropist. She was born in Bristol, England on February 2, 1745. More was a lively, quick-witted, and charming young woman, who taught in a boarding school established by her father before embarking in a literary career. Early on, Hannah displayed a flavor for poetry, spending most of her childhood writing sonnets and essays. This served her well as she grew to become a popular playwright. She was involved with the literary crowd in London and was a member of the Bluestocking Group—a group of elite literary and intellectual women.

More was a strict moralist and this challenged some of her literary and social circle.[1] It was becoming evident to her friends that she desired to withdraw herself from society to devote her talents to a useful purpose. She preferred the Bible to all other books; it was her daily companion, and the more she studied it the more she fell in love with its words. She began to write “Sacred Dramas,” together with an epistolary poem, entitled Sensibility, which gave her much joy and fulfillment. While More was writing these dramas and poems, she became deeply captivated with religious subjects. Her views of the doctrines of Christianity underwent somewhat of a change. “She now saw that salvation by faith was the only method recognized in the word of God, and her deep humility, and her anxiety after religious instruction, are convincing evidences that, in the language of the Saviour, ‘she was not far from the kingdom of God.’”[2]

In 1780, during the peak of her high-society life in London, a friend gave More the book that forever changed her life—Cardiphonia. In the years following her reading of Newton’s collection of letters, she became “disenchanted with the trappings of high society and turned more fully toward the Christian faith she had assumed all her life but not embraced with full intention.”[3]

Because the book had been published pseudonymously, More was not aware who Newton was. After much inquiry and searching she discovered that Newton was the author and went to hear him preach at St. Mary Woolnoth, where he was pastor. The two spoke for some time after church, and he changed her life forever, “It was Newton—his, writings, his sermons, and his friendship—who convinced More to devote her life to promoting spiritual education and reformation across British society.”[4] The two were friends for life.

In 1776 More began to be involved in the anti-slavery movement. In 1787, she met William Wilberforce, another encounter that changed her life. Wilberforce was an evangelical member of Parliament who fought for the abolition of the African slave trade, and of slavery itself. Wilberforce fought for forty-six long years to see both abolished. His bill to abolish the slave trade was defeated eleven times before it finally passed in 1807. The abolition of slavery however, did not gain victory until 1833—just three days before he died.

More was so taken with Wilberforce’s integrity and character that she became a member of his group known as the Clapham Group or Clapham Sect. Wilberforce started the group to deal with the moral decay engulfing England. The Church of England was becoming less desirable as the theater and comic operas seemed to infiltrate the culture. He heard with certainty the call of God; “He jotted in his diary those now immortal words: God Almighty has set before me two great objects: the suppression of the slave trade and the reformation of manners.”[5] This commission was the motivation behind the foundation of the Clapham Group to reform society.

The Clapham Group were great influencers of society; “never have the members of one congregation so greatly influenced the history of the world. The effect of their prayers and actions not only profoundly altered the religious and social life of this country, it was also felt in Africa, in the West Indies, in India and in Australia.”[6] The group believed the most beneficial way to see reform in their country was to be involved in society; “We can fulfill Christ’s commission to disciple the nations by using the talents and skills God has given us and doing business with them.”[7] The group lived by this principle, understanding this to be the way to reach people with the Gospel. “The Clapham Group had members who were in professions such as banking and law, others did research, and others were church leaders. But they all worked together to reform the nation.”[8] In spite of the moral decline, the Clapham Sect was determined to see reform, and became involved in the communities in which they lived. For Wilberforce and the Clapham Group, reform did not come from government or from an ideology; the reformation of society was achieved through the redemption of souls.

The group was involved in every area, from health and education to humanitarian efforts and even the media, publishing a Christian newsletter, The Christian Observer. Hannah helped give the abolition movement a public voice with her writings. In 1788, she wrote Slavery, a Poem, to coincide with Wilberforce's parliamentary campaign for abolition. The poem dramatically described a mistreated, enslaved female separated from her children, and it questioned Britain’s role in the slave trade.

Wilberforce saw a link between social good and eternal good, and when he saw the terrible plight of the poor people in Mendip Hills, he urged More to establish a school to teach them to read. By 1789, Hannah, along with her sisters, Patty and Marta, founded and provided schools for the poor in Cheddar and Mendip Hills, as well as Sunday schools and adult classes—all underwritten by Wilberforce. She taught children to read from lessons based on the Bible and began to write her famous Cheap Repository Tracts to provide them with wholesome literature. Within a year of their publication, “two million had been sold—and the total population at that time was under eight million!”[9] More’s heart is revealed in her letter to Wilberforce regarding the schools: “What a comfort I feel in looking around on these starving and half-naked multitudes, to think that by your liberality many of them may be fed and clothed; and O if but one soul is rescued from eternal misery how we may rejoice over it in another state!”[10]

More was one of the leading women among the evangelicals of her day. Admired and loved by her friends, she became known as the “bishop in petticoats.” Her moral essays influenced her country for over thirty years; “she was a pioneer in social and moral education.”[11]

Martin Luther wrote, “If you want to change the world, pick up your pen and write.”[12] Hannah More changed the world with her pen and by putting her faith into action. James 1:27 says, “Pure and undefiled religion in the sight of our God and Father is this: to visit orphans and widows in their distress, and to keep oneself unstained by the world” (NASB. More was the exemplification of this. She herself wrote, “Action is the life of virtue, and the world is the theatre of action.”[13] She died just weeks after Wilberforce and the Clapham Group’s long fight in 1833, when England finally abolished slavery. She was a pioneer and one of the first evangelical women philanthropists who changed the shape of society in Britain.

Hannah More serves as an example for women today who seek to make a difference in the world. If you want to change the world, pick up your pen, or whatever gift God has graced you with, and go reform the world.

*Originally posted in the 12th Edition of SHINE Magazine September 2019*