Ode To My Father


I read a beautiful quote today from Ann Voskamp; “Joy isn’t ever in a season, but in the way we see. His Grace, His mercy, His love — saturating everything.”

Joy does not always easily come; though even in the toughest of trials it beckons. If it were not for the grace of God, I would not have been able to stand up under the last two weeks. The day before my dad went to the ER, I wrote about God’s faithfulness…it proves true yet again…

The journey began Monday October 7, with the ringing phone, mom on the line, “I think I am in trouble with dad.” I had held my breath for months, through all my dad’s illness for this phone call; it came just two days after my dad was home from the rehabilitation facility from surgery to remove his tumor.

I rush over to mom’s to find the paramedics and firemen already there…dad on the stretcher; my sister there too. Dad was shaking uncontrollably, grinding teeth, and not able to communicate well. My mom and I met my dad and sister at the ER, and things became worse. The doctors believed he was having a seizure or a stroke, but they ruled that out by CT scan. He seemed symptomatic of a seizure; it was like watching him have one for three hours; they could not get him to relax. He was grinding his teeth, eyes rolling in his head, it was awful; I had never seen my dad like that before. They gave him seizure medicine in hope of relaxing his symptoms. He lost consciousness and they moved him to ICU late Monday night. His blood cultures proved positive for an infection gone septic. They began immediate aggressive antibiotic treatment, but after twenty four hours, the lactic acid level was untouched.

The doctors advised us that the infection had taken over and that it was not survivable. He never regained consciousness. They pulled the fluids and the antibiotics; replacing it with morphine every two hours, and moved him into comfort care, and we watched and waited for him to pass. Over the next several days I read the book of Psalms aloud to him;

So that he might make it holy by cleansing it, washing it with water and the word. Eph 5:26 ISV

My mom and I stayed at the hospital 24/7. My sisters and the rest of the family spent the next several days at the hospital with him. The sound of his breathing was loud and rhythmic; the room grew utterly silent of his breathing; we ran to his side and watched as he took two small breaths, and stopped. He passed from this world and into the arms of the Lord Sunday afternoon, at 4:49 PM.

My father was buried with honors at Fort. Logan National Cemetery; it was a beautiful day… 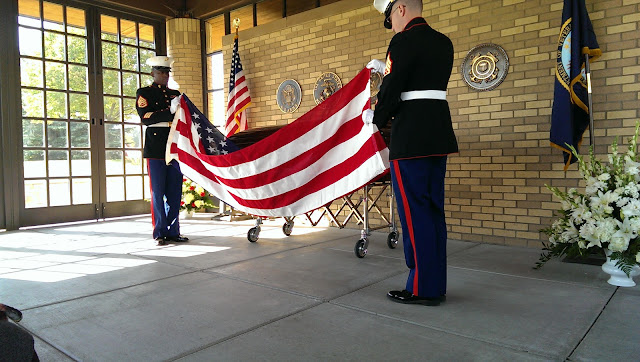 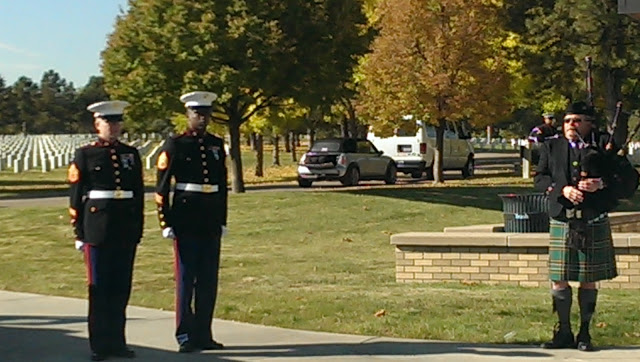 The service was held at my parent’s church…I gave the eulogy you may find it below.
How do you find joy when you spend just short of a week watching your father die? By the grace of God…when you look at life through His eyes. 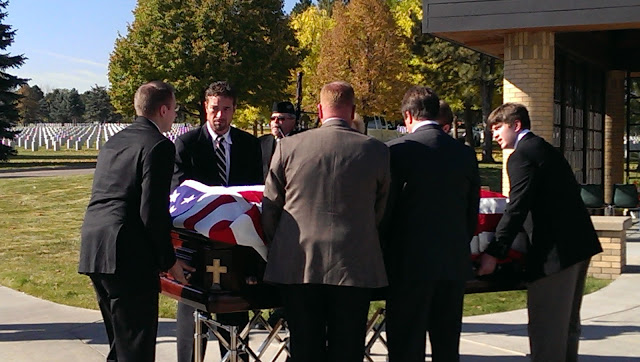 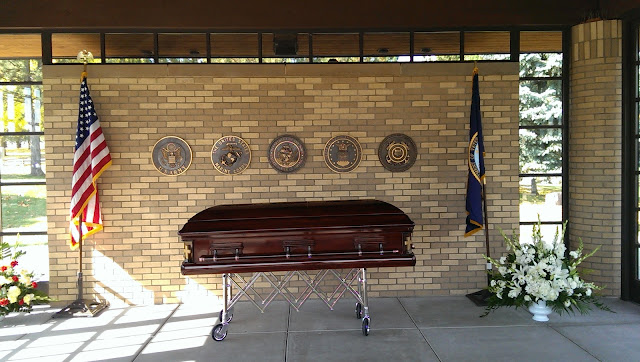 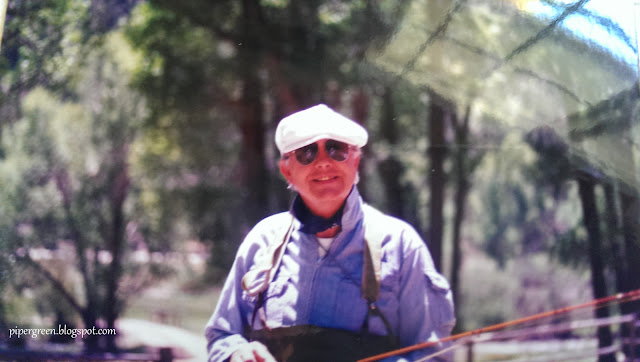 Marvin spent the first six years of his life fending off illness, a strep infection forced his parents to move to Denver in 1936, so that Marvin could undergo a bilateral-mastoidectomy to remove the infected bone from behind the ear. He also was one of the first in the US to receive antibiotics, which had to be flown in from Germany. For years to follow he did not experience significant health problems, but medicine would be a part of him for the rest of his life.

Upon graduating from Denver South high school in 1948, he attended Colorado A&M, which is now CSU. However, college was put on hold as he was called into active duty to serve in the Korean War. He jokingly remarked to a buddy, that thanks to the war, he didn’t have to study for his upcoming Zoology exam. He completed infantry training in California and In April of 1951 was assigned to the First Marine Division as a rifleman. He was released from active duty as a corporal—earning a Purple Heart Medal for shrapnel in his shoulder, which he also carried for the rest of his life. 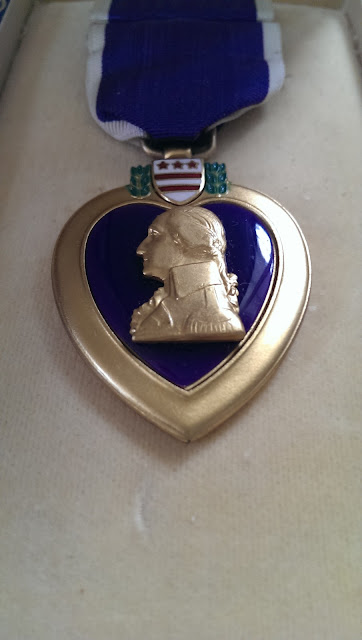 He re-entered college in 1952 and received his Bachelor of Science in Zoology in the June of 1954. He considered becoming a Veterinarian, but his college counselor would not have it, and refused to sign a recommendation for him unless it was to enter medical school. He devoted the next two years to graduate research studies and finally entered medical school in the fall of 1956. He continued as a graduate assistant in teaching Zoology Laboratory and Ornithology. He enjoyed research, however, it became clear that clinical medicine was his calling. Though, his interest in Zoology and Ornithology continued, as numerous cats, dogs, reptiles, and the like were a constant in the Burnett household, along with the Field Guide to North American Birds and a pair of binoculars.

In 1960 he graduated from the University of Colorado School of Medicine. After graduation he served as a Captain in the United States Army from 1960-1961 in the state of Washington, to complete a one year medical residency. From 1961-1964 he completed a residency at Presbyterian Hospital in Denver and completed a second residency with Denver Presbyterian in Pathology from 1964-1965. This was not enough for my dad as he completed yet another residency at the University of New Mexico from 1965-1966 in Hematology.

Just a few years later my father and two partners, Dr. Robert Berris and Dr. Paul Hamilton founded Hematology Oncology Associates in Denver, down on 18th and Franklin. This is the original entity that over the years has grown and evolved into what is now Rocky Mountain Cancer Center. Though retiring in 1998, medicine continued to surround his life.

Apart from practicing medicine, my dad also enjoyed the outdoors. It is no secret my dad loved to golf, but even more he loved to fish. In fact, his Physical Therapist Adam, endured 10 years of bibliographies of fly-fishing must-reads. His hobby of tying his own flies reflected his love for the stream, and you would be hard pressed to find something in the Burnett house-hold that did not have either the Orvis, Trout Unlimited, or Catch and Release logo proudly displayed. He loved taking the family fishing. The first morning light of loading the station wagon with tents, pillows, blankets, fishing tackle, coolers, kids, and the like, proved inspiring. The white and black checkered luggage carrier on top of the brown and white wood-grain ‘76 Country Squire station wagon, was indeed a sight to be seen. By the time he unloaded the fishing tackle from underneath the non-essential fishing equipment, he could expect a good hour or two of prime fishing. 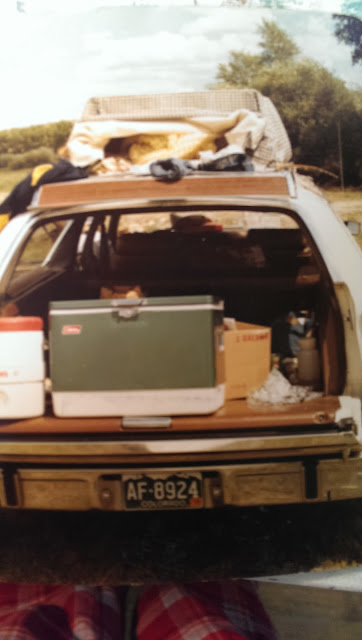 He also loved to hunt. I can remember many trips to the far-east; well, the far east of Colorado or Kansas to walk the corn fields. I did get to accompany him, as the assistant to his retriever. I loved those memories, good times!

My father earned a mention in his former Drill Sergeant’s memoir of the Korean War, The Run Up to The Punch Bowl. The Punch Bowl was an ancient volcanic crater off the coast of Japan, and it gave the North Koreans a great advantage in the war. My dad had to face a Punch Bowl of his own, which included many life-threatening illnesses, that resembled a volcanic crater that at times seemed to have the advantage. But my dad lived a life of miracles. 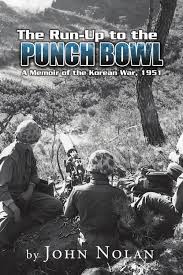 His first miracle as a child, receiving antibiotics for a strep infection was the first not the last. His second life miracle was surviving the rearing of three daughters. He earns double credit for me, he should receive a special honor for surviving my teenage and young adult years, until Christ grabbed hold of my heart and life and gave my dad a bit of a reprieve. But as I heard a wise pastor’s wife once say about child-rearing, “Who could be a better parent than the heavenly Father, and under perfect circumstances, His children fell.” So I hope that comforts my dad. He was a good father, one that loved his family, and his faith. His faith dictated his practice of medicine, and his compassion for the sick and dying still strikes me today.

Just as the first six or seven years of my dad’s life began warding off sickness, the last six or seven years of his life was spent the same way. Though many illnesses threatened my dad, he kept them at bay, until Sunday October 13, 2013. It was simply his time. I can see the finger prints of Jesus all over his life. And it is the grace of God that allowed my dad to be with us as long as he was, in the face of illnesses that sought his life.

You see Psalm 91 on your programs today, it is fitting. Barb Roberts read it over my dad just a few days before he passed, and we all knew that Psalm would be a part of my dad’s service today. Because although, it looks like from our perspective that pestilence did come near my dad, and in fact ended his life, death does not win, it does not have the last word. The Cross of Christ overcame the power that death had; 1 Corinthians 15:55 taunts death, “O death, where is your victory? O death, where is your sting?” I don’t think it a strange coincidence that this verse has three “fives” in it, as five is the number of grace. Christ forever destroyed the power of death, and though we may be separated from our bodies which are decaying, we can never be separated from spending an eternity with Jesus our Lord.

It will forever be a precious memory that I witnessed my dad’s last breathe on earth, as he enter into the presence of the Lord, with such peace. My dad is now with the Lord and no longer does cancer, triple “A” ruptures, strokes, or infection plague his body. He can speak again, he can walk perfect again——no plague comes near his dwelling, for now he is truly sheltered in the wings of the Most High, for our hope is in God. I heard another pastor’s wife say of hope, after her son committed suicide, “Having hope is not a magic spell we use to get our way - it simply realigns our hearts towards God in such a way that allows faith to grow and opens the doors to miracles. God is all that remains constant - our hope is IN HIM. Our hope is in a Person, not a particular outcome.” (Kay Warren). Yes, I prayed and hoped for him to be healed. God answered my prayer, just not on this side of eternity. Isn’t that our hope as believers? That is my hope. I know that I will see my dad again one day. And that is what takes the sting of death from us, that Christ-followers have it all - hope for today AND hope for tomorrow.

I love my dad. I always looked up to him and respected the accomplishments in his life. How he took care of and provided for his family. A beautiful reflection of the heavenly Father; who provides and cares for the needs of His family. We will always love you dad, your life truly glorified God.

In His Grace,
Heather