The Feast of Tabernacles and The Tabernacle of David

Wednesday night at sundown, the Feast of Tabernacles drew to a close. This feast is my favorite to study because of the symbolism that speaks to the Lord’s person and ministry, who came and tabernacled with us. The reason I love examining the feasts, is to celebrate the Christology in them and the fulfillment of them in Christ. I do not “keep” the feasts, but I study them to gain an understanding of end-time events. Not all of the feasts have been fulfilled. The fall feasts, (The Feast of Trumpets, The Feast of Tabernacles, and the Day of Atonement), speak to future events.

“Nothing that has yet taken place, answers to this season of festive joy; its answers are to be found in the future day of glory when Christ and His risen saints shall fill the heavens above, reigning and rejoicing over  the world.” [1] 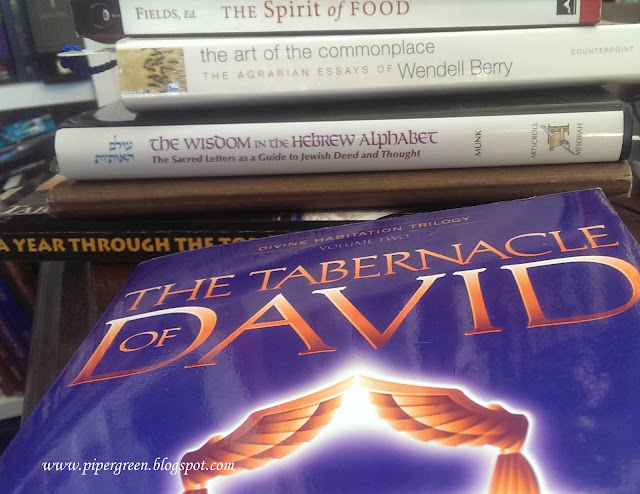 For believers in Christ, He is our atonement, but there is coming a day when all Israel will look upon Him who they pierced {see Zech. 12:10} and receive Him as the Messiah.

Leviticus 23 describes the Lord’s command for the Feast of Tabernacles. The people are to build temporary tents, or as The NASB renders it, Booths; it is the Lord’s appointed time to remind the Israelites of their season in the wilderness, of living in tents, and how the Lord sustained them (Lev. 23:33-44). It is also a time to celebrate in awe and wonder that the Creator of the universe came to dwell with His people.

God spoke to us in His Word through the Tabernacles of Moses, David, and the Temple of Solomon. They all speak to the life, work, and ministry of Jesus Christ. The Gospel of John uses the Feasts of Israel to demonstrate that Jesus is who He claimed to be—the Messiah, and the fulfillment of all the symbolism they contain.

On the close of the of the first day of Tabernacles, worshipers descend to the Court of Women where great preparations for the feast are made.[2] In the court there were four large golden menorahs (lampstands) each with four bowls. Four young men of priestly descent, climbed ladders with a pitcher of oil to fill the bowls. The Gemara (rabbinical commentary on the Mishnah) on this passage says, the menorahs were seventy-five feet high (Sukkah 52b).[3] “There was not a court in Jerusalem that was not lit up by the light of the ‘house of water-pouring.’”[4] This is the ceremony of the Illumination of the Temple, and the lampstands could be seen throughout Jerusalem.

It is in the sight of these large lampstands that Jesus heals a man born blind. Jesus is the fulfillment of the symbolism in the Feast of Tabernacles as the Light of the world. When He saw the blind man He said, “As long as I am in the world, I am the light of the world” (Jn. 9:5). Jesus applies mud to the man’s eyes and instructs him to wash in the Siloam pool; the man followed Jesus’ instructions and was healed. It is no accident that water, blindness, and joy are symbols in the feast and in the ceremonies, and that they correlate with the events in Jesus’ ministry.

Just before the lighting of these lampstands the priest announces, “He who has not seen the joy of the place of water-drawing has never in his life seen joy.”[5] The ceremony was a time of great joy and celebration, and it happened in the light of the Temple court. “The Levitical orchestras cut loose, and some sources attest that this went on every night of the Feast of Tabernacles, with the temple area shedding its glow all over Jerusalem.”[6] This is the context for Jesus’ declaration, “I am the light of the World (Jn. 8:12). John, at the beginning of his testimony, declared Jesus to be the light of men (Jn. 1:4). The light has Old Testament allusions of the glory of the very presence of God in the cloud that led the people in the wilderness. This may have other allusions as well:

The light may be an allusion as well to the Shekinah glory that filled the Temple (1 Kgs. 8:11). John uses this symbolism to testify to Jesus’ christological claim to be the light of God to the world. Jesus is the very embodiment of this feast.

Why was the Tabernacle of Moses built? Because God desired for them to make Him a sanctuary so that He can dwell among us (Ex. 25:8). He instructed the building of the tabernacle in order to establish and foster the covenant relationship between Him and man. The Ark of the Covenant, which rested inside the Holy of Holies, was where God’s glory dwelt. This also speaks of the ministry of Christ as He is the glory of the Father {Heb. 1:3}.

At the dedication of Solomon's temple during the festival of Sukkot, Solomon asked, “Will God indeed dwell on the earth?” (1 Kings 8:2, 27) This was fulfilled when Yeshua became flesh and dwelt (tabernacled) among us (John 1:14). At His first coming, He came to earth and dwelt among men for more than thirty years. He dwells in us now through the Holy Spirit. When He comes again, we will dwell with Him forever.

The Feast of Tabernacles came to be associated with eschatological hopes (cf. Zech. 14:16-19).”[8] Jesus was the fulfilment of the feast, however, it holds future eschatological implications as well. This Feast “represents the completed or finished work of God in both this present age in which we live and the lives of individual believers.”[9] The Feast of Tabernacles represents the Lord’s shelter in His future Tabernacle during the Kingdom Age. He will establish His Tabernacle in Jerusalem (see Ezek. 37:26), and the world will appear before Christ and worship Him (see Zech. 14:16-17). “Tabernacles is the one Old Testament feast that is specifically singled out for observance in the eschatological context of the testament of peace.”[10]

“‘In that day I will raise up the fallen booth of David, and wall up its breaches; I will also raise up its ruins and rebuild it as in the days of old; That they may possess the remnant of Edom and all the nations who are called by My name’ Declares the Lord who does this” {Amos 9:10-12}.

“After they had stopped speaking, James answered, saying, ‘Brethren, listen to me. Simeon has related how God first concerned Himself about taking from among the Gentiles a people for His name. With this the words of the Prophets agree, just as it is written, ‘After these things I will return, And I will rebuild the tabernacle of David which has fallen, And I will rebuild its ruins, And I will restore it, So that the rest of mankind may seek the Lord, And all the Gentiles who are called by My name,’ Says the Lord, who makes these things known from long ago” {Acts 15: 13-18 NASB}.

David’s Tabernacle was simply a tent, pitched in Jerusalem on Mt. Zion. It is important to know that David’s Tabernacle and Moses’ Tabernacle were functioning at the same time. In 1 Samuel we read about the capture of the Ark of the Covenant, which represented God’s presence Himself, as it was taken into battle presumptuously. It was never again to return to the Tabernacle of Moses. However, the priestly service and sacrifices continued. King David, was a worshiper; a man after God’s heart. He desired to bring the Ark back to Israel to restore God’s honor and presence to its rightful place. David lived in Jerusalem and he wanted to make Jerusalem the “worship center of the world.” David set up a tent in Jerusalem to bring the Ark—God’s presence—to rest.

In 1 Chronicles we read about David bringing the ark to the new Tabernacle. The Levites had purified themselves in preparation, and though sacrifices were not part of David’s Tabernacle, seven bulls and seven rams were sacrificed to the Lord, as the ark was moved from Obed-Edom’s house to its new resting place. It rested there for forty years until Solomon’s Temple. David’s Tabernacle was a new established order of worship. Moses’ Tabernacle did not have musicians and instruments. The form of worship was in obedience and sacrifice. In John 4, the Samaritan woman argued with Jesus about where the proper place of worship should be. The Samaritans worshiped at Abraham’s well, the Jews worshiped in Jerusalem. Jesus told her that true worship was not about a place, but worship must come from the heart:

“Woman, believe Me, an hour is coming when neither in this mountain nor in Jerusalem will you worship the Father. You worship what you do not know; we worship what we know, for salvation is from the Jews. But an hour is coming, and now is, when the true worshipers will worship the Father in spirit and truth; for such people the Father seeks to be His worshipers. God is spirit, and those who worship Him must worship in spirit and truth” {Jn. 4: 21-24}.

The rebuilding of the Tabernacle of David is not only speaking of the expansion of the Kingdom to the Gentiles, but also to a revival of the kind of prayer and worship that existed when David’s Tabernacle stood in Jerusalem.

The verse in Amos 9:10-12  tells us that God will reestablish David’s tent over both the Northern and Southern Kingdoms. David’s reign had been a protective covering (tent) over all the people of Israel. It fell with the split between the ten Northern tribes and the two Southern tribes {1 Kgs. 12}. The “tent” had been broken in two, but God promised to unite the two kingdoms again under David’s rule {Jer. 30:3-10; Ezek. 37:15-28; Hosea 3: 4-5}. This means the Jews and the Gentiles. The “remnant of Edom” and “all the nations who are called by My name,” directly reference the Gentiles.

“The united kingdom under its Davidic King will then become the source of blessing to all Gentiles. Edom, a nation perpetually hostile toward God’s people {cf. Num. 20:14-21; Ps. 137:7; Obad. 1}, and therefore representative of all Israel’s enemies, will become a sharer in the promises to David: Israel will possess the remnant of Edom {cf. Obad. 19}. In fact, all…nations will be brought under the dominion of the Davidic King, for they too bear God’s name.”[11] David was a symbol and type of Christ; the Davidic Kingdom speaks to the Kingdom of Christ.